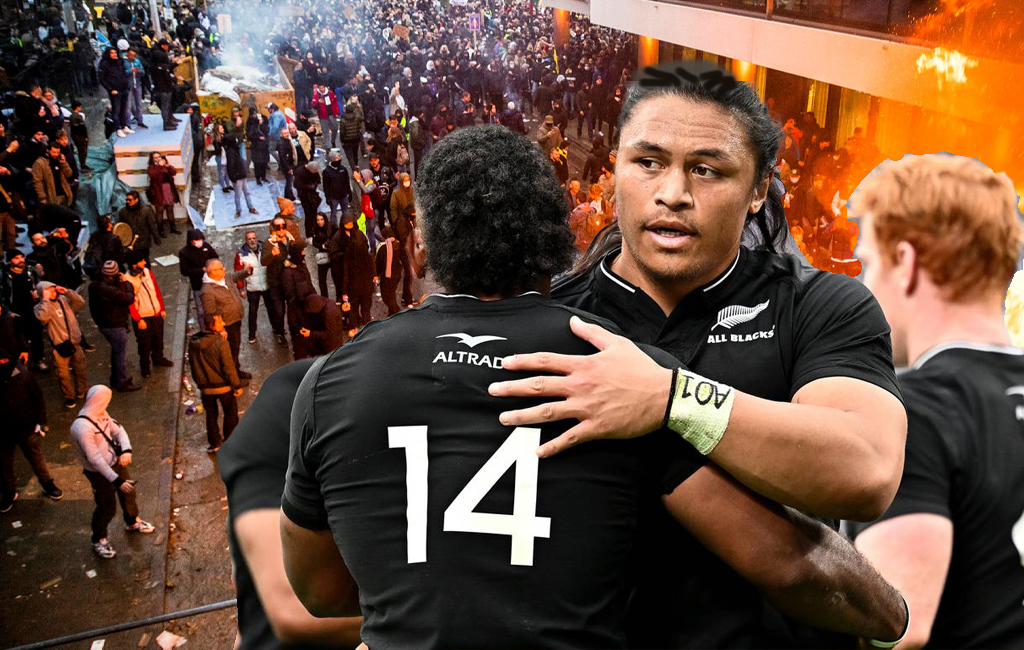 The All Blacks may not know it yet, but New Zealand came very close to becoming a failed state last night.

Had they lost their lead against Japan, with the sending off of Brodie Retallick, many pundits were predicting riots in the streets, as a loss to Japan could have been the straw that broke the back of a very overloaded camel.

The country is already facing numerous issues, including the cost of living, the health system crisis, homelessness, gang violence, low school attendance, ram-raiding and FBoy Island. But a loss to Japan would have pushed many kiwis over the edge.

59-year-old Graham Darby from Taranaki is one such person who was pondering which blunt object he was going to reach for to take his anger into the streets. “I was just watching that game and thinking about the cricket bat I’ve got in the garage that would really work against a shop window I might have to smash in a looting spree.

“What the hell is going on with the All Blacks? Is it so much to ask that we win every single game effortlessly? It’s like I’m watching games now and not even being able to relax with a cup of tea and a bikkie, knowing full well that we will win by 21+,” questioned the retired FMG insurance advisor.

“I’ve said this before, a losing All Blacks team is bad for the economy and a recipe for plummeting business confidence.

“But bloody hell, a loss to Japan would have been a disaster. I’d have been out in the streets of New Plymouth with my Gray Nicholls looking for any high end store to take my anger out on,” explained the man who was relieved that total societal collapse was avoided in the end.

At the other end of the spectrum, the famously smug millennial Ruby Wareing has tweeted her support for Japan, to the embarrassment of her father James, who remembers the days when she’d sit on his knee and they’d cheer on the All Blacks together.

“Amazing work from Japan, unlucky to not get a historic win against the arrogant, overhyped and entitled All Blacks”, she tweeted with what was sure to be a reckless smirk sailing up the side of her face.

James Wareing, Ruby’s father, was not available for comment but released a statement saying that he loves his daughter very much and he hopes she is just going through a phase that she will snap out of when she reaches her thirties.