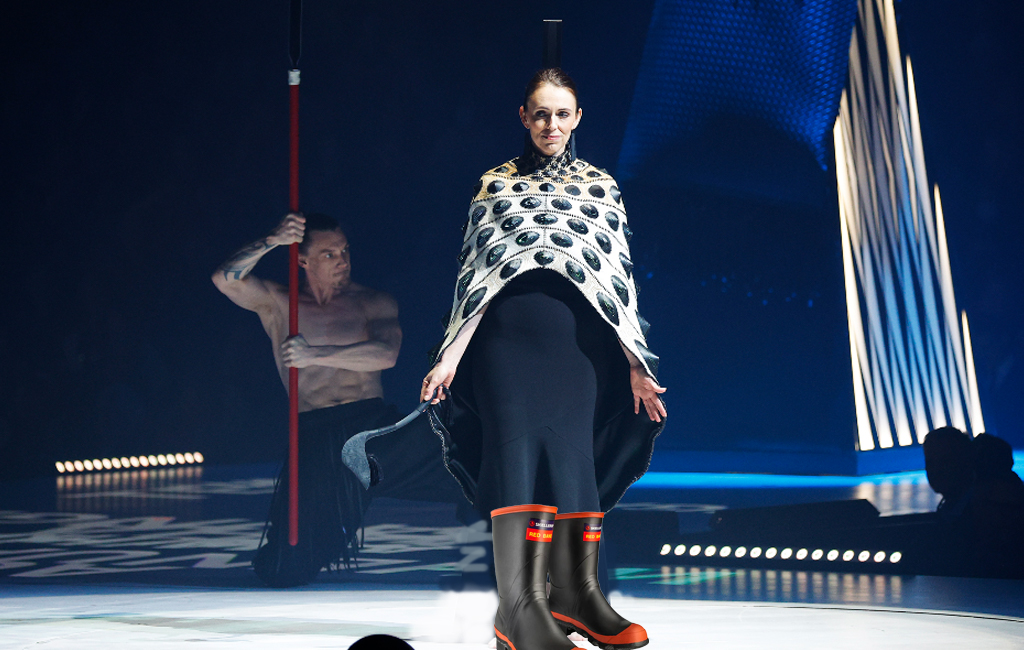 Following her appearance in the World of Wearable Arts fashion show, Prime Minister Jacinda Ardern has taken to the runway once more to model a classic pair of kiwi gumboots – an accessory that she will most definitely be wearing when she delivers her next boot the guts of the farming industry.

The scheme is set to put an estimated 20% of farmers out of business and make the supermarket price of meat and dairy even more ridiculous. All so we can reduce emissions in a country that already has the most modern sustainable farming practices. One might say it would be better for the planet if a few of our farmers went over to the developing world and shared their knowledge.

When Ardern was approached for comment about her plan to kick the living shit out of farmers, her response was “If I may, this is a complex situation” followed by some indistinguishable waffle about misinformation.

Whakataki style icon Josie Watts said that the red rim Skellerups will make a real statement over the next couple of years. “They’re a kiwi classic and that’s why they’ll be perfect for dealing a knockout blow to the farming industry,” she said.

“If it wasn’t enough that the government has decided to punish the backbone of New Zealand’s economy with a strong boot to the abdomen, the choice of footwear adds insult to industry. Imagine the boots that farmers have grown up with being used to deliver an attack like this.

“Such tragic irony in Ardern’s fashion choices, that’s why she’s the best,” said Ms Watts as she began reading emails from her contacts in the industry.

“Skellerup are going to be so hot this season. I am putting in my orders now because these gumboots are going to sell out fast”.