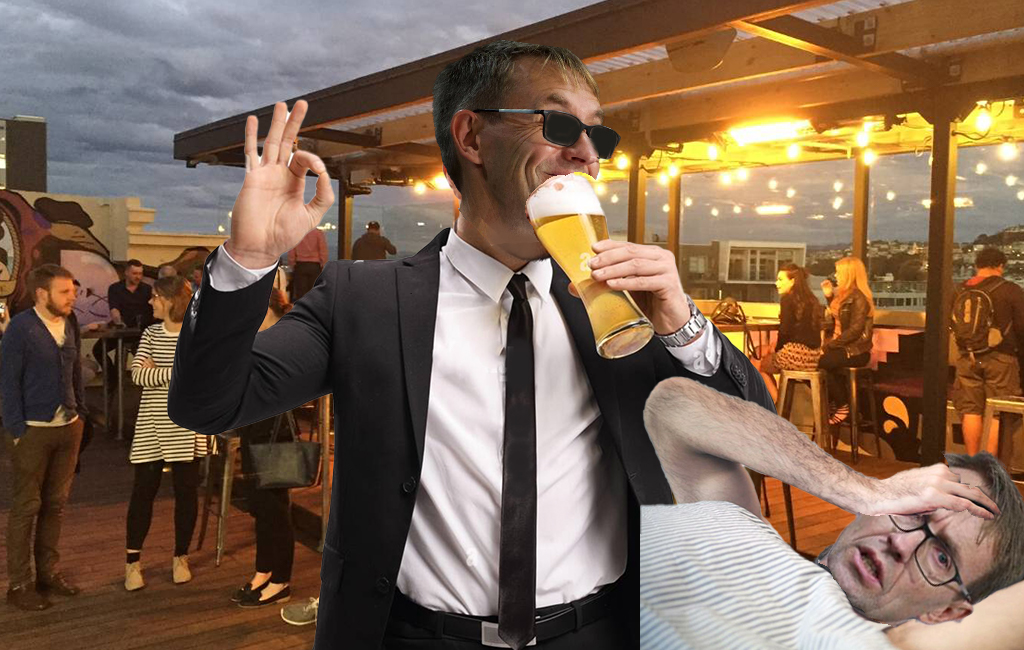 Dr Ashley Bloomfield finally let his hair down last night but boy is he paying for it today.

The Director-General of Health, who deserved a beer more than anyone in New Zealand, decided that Tuesday night was the time to celebrate the end of two years spent fronting New Zealand’s pandemic response.

The Whakataki Times reporters were invited to Bloomfield’s monumental piss up yesterday afternoon, where he was first seen heading towards the Ministry of Health’s well-stocked piss fridge, marching directly past the cans of Sprite on offer.

“Won’t be having any of those tonight,” Bloomfield smirked as he filled his arms with multiple cans of Panhead Supercharger..

Today was a different story however, as the senior health official was feeling anything but healthy.

With a skull filled to the brim with concrete, Bloomfield’s first attempt to rise from his bed resulted in a four step stumble head-first into the hardwood floor. From there he crawled the length of the hallway towards water and panadol.

“Errrgh..”, he verbalised prehistorically as he attempted to squint some memories from last night back into his consciousness.

On the night in question one unnamed guest from the Ministry of Health spoke to the Whakataki Times.

“Gee it was good to just see a senior public servant let loose when they deserve to. Unlike some politicians, this guy has actually been working bloody hard.”

After eliminating what seemed to be 10,000 beers, which he thoroughly deserved, Bloomfield charged to Courtney Place faster than the spread of Covid.

James Cramond, owner of several nightclubs in Wellington’s Courtenay Place, said he’d been planning for the Blomster’s big night for the past couple of months.

“If there was anyone who deserved to be out on a Tuesday night it was Bloomfield. Our staff were well prepared for him to let the dogs out, and that’s exactly what he did”

Bloomfield’s hangover is expected to linger until his official last day on the 29th of July.