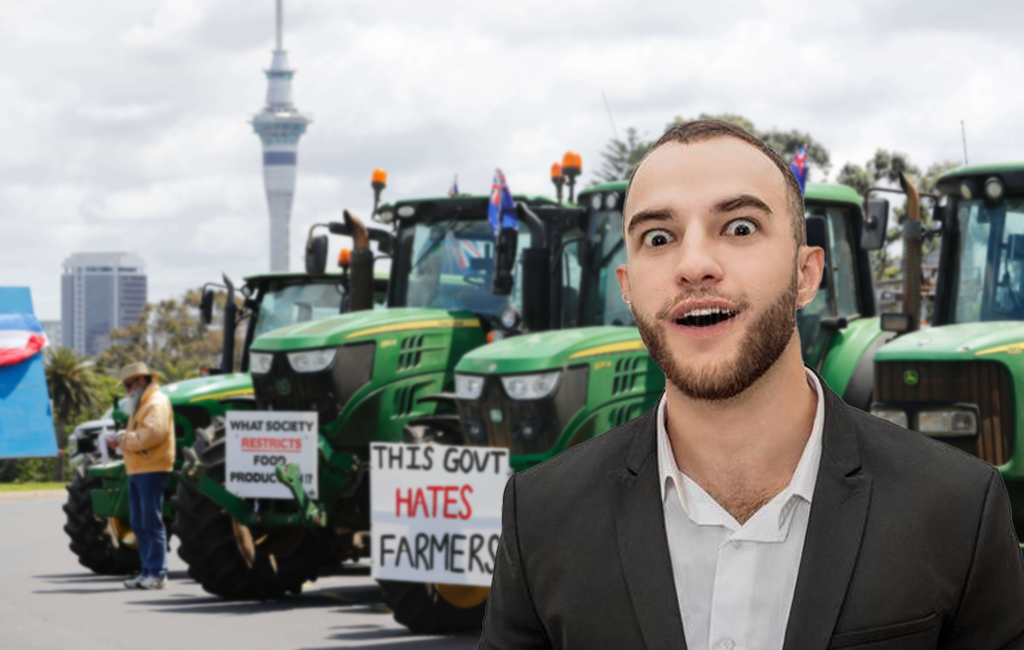 Parnell based marketing pro and regular participant in the lunch rush, Ryan Jacobs got the fright of his life today.

As he arrived at Auckland Domain with his normal takeaway sushi, he was confronted by a fleet of large tractors and various other farming vehicles, all out in force to protest the government’s farm emissions scheme. Having spent his life in inner city Auckland, it was as if it was the first time he’d actually seen a tractor.

“Wow there’s so many of them! Big vehicles aren’t they?” he said excitedly as they rolled past making as much noise as possible and displaying messages of opposition.

“‘NO FARMERS, NO FOOD’ ha, well can’t really argue with that can we?” laughed Jacobs as he read one of the placards being displayed democratically. “Good on them for having their say in the middle of the day instead of in the middle of rush hour traffic. Nice that they haven’t tried gluing themselves to the road as well!”

Our reporters pressed Mr Jacobs about whether he had in fact seen a tractor before.

“Um, yeah I think I have. Definitely seen them in movies and on TV. Country Calendar and stuff like that. I must have seen one on holiday around the country growing up.

“I’m not 100% sure though,” he said as he got his phone out to take a few snaps of the festivities.

“Global warming is definitely happening though and we need to do something for sure. But cutting down the food supply seems really, really wrong doesn’t it? Does Jacinda think this is going to impress people at the UN?” he asked as he started making his way toward a good place to plonk himself down.

“Good to see all these massive machines out on display in the town though isn’t it? It’s like one of those “A ‘n’ P shows” I’ve heard people talk about before. I think.”