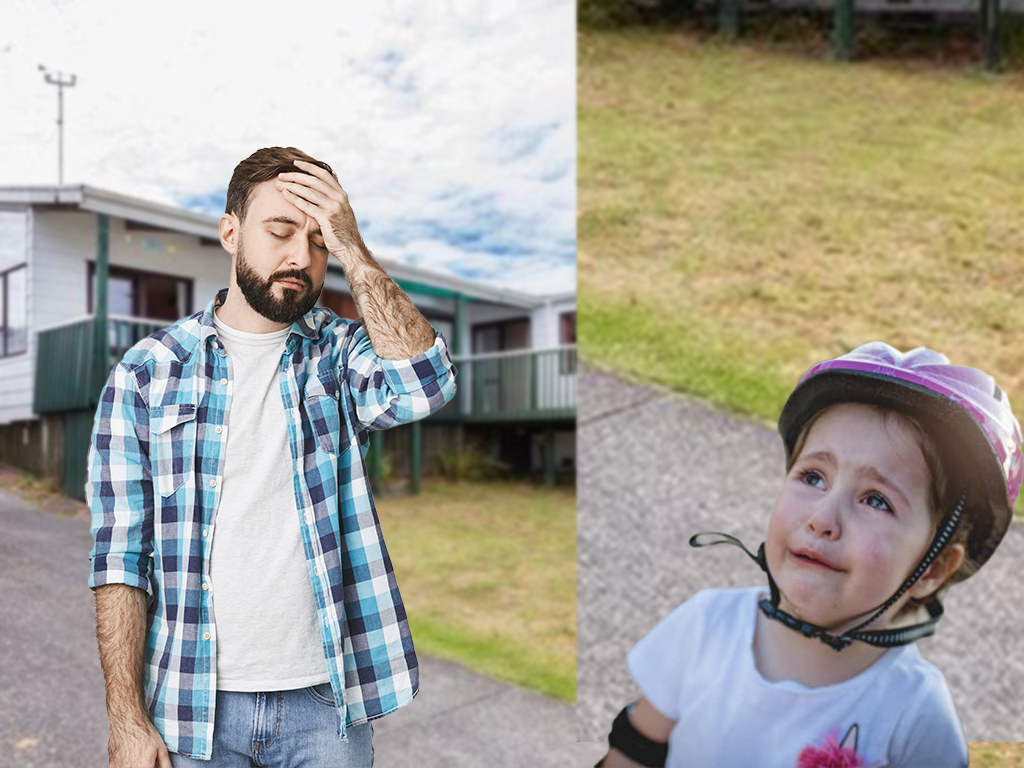 Whakataki Dad Kelvin Wells is in the dog box today, going from hero to villain in the eyes of his four-year-old daughter Emma.

The 38 year-old father of two began his weeklong stay in said dog box after carelessly breaking his promise to Emma that he would not pinch the skin under her chin while attempting to secure her bicycle helmet.

“Daaadddddyyyyyyyyy!!!!” she cried before abruptly leaving the scene in tears, partly due to the physical pain of the click fastener pinching her skin, but mostly due to her father’s complete and utter betrayal.

Wells, a drain layer originally from Hamilton, explained that he was only trying to make sure his daughter’s protective helmet was on properly. He opened up to the Whakataki Times about the unfortunate incident.

“I mean, she said to be careful, but geez, I was just trying to make sure the helmet was sturdy enough and the next thing I know she’s run off crying.”

Wells confirmed that his daughter’s unshakable distrust was brought on by how he recklessly clipped her bicycle helmet buckle and didn’t even make sure that he could physically see that it wouldn’t pinch her chin.

“Well I should have let her put her hand through the gap and then clipped it from there. Probably should have loosened the strap a bit more too. Ah well, she’ll be right.

Witnesses first on the scene confirmed to the Whakataki Times that Kelvin pulled the straps as far as they could go and then attempted to do a tight clip with the buckles.

“Can’t she just put the bloody thing on herself? She’s four isn’t she?” speculated the under-fire father.

Connor Wells, 2, who appeared to find his sister’s misfortune hilarious couldn’t be reached for further comment.