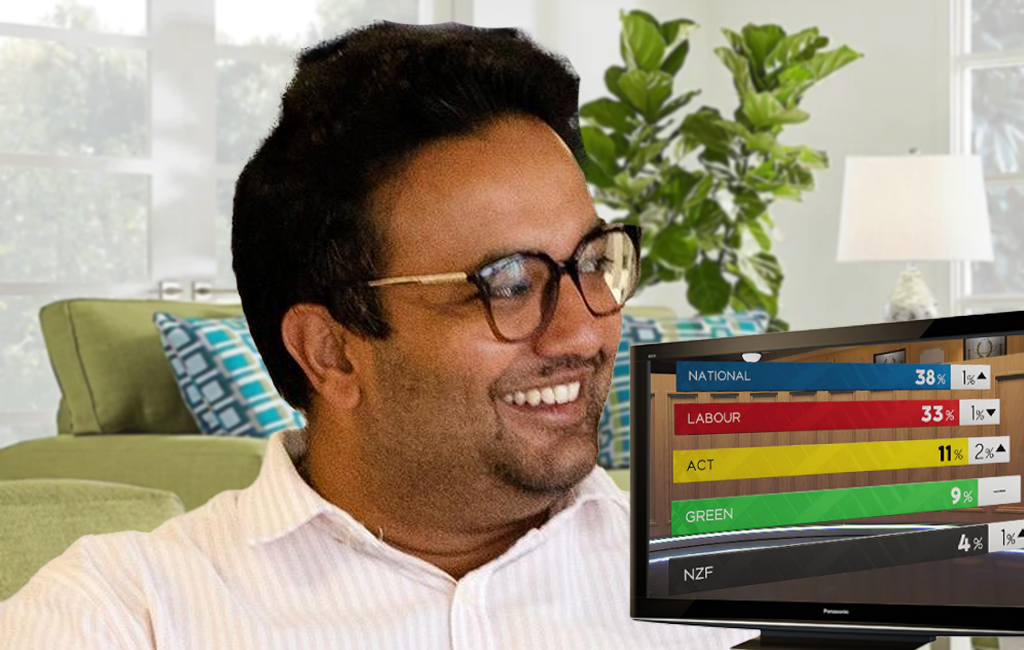 Expelled Labour MP Guarav Sharma is lucky to avoid a fine from Hamilton City Council today after a complaint was made to noise control about his “loud and uncontrollable laughter”.

Sharma was in his lounge when noise control officers banged on the door to give him his verbal warning.

According to Noise Control’s official report, Mr Sharma’s statement was apologetic, saying something to the effect of “Sorry officers, I was just watching the Prime Minister trying to control her party. I got a little bit carried away”.

Our reporters got hold of Mr Sharma for a few comments in between multiple loud outbursts of laughter.

“Well there was the first poll this week hahaha, which had Labour at like 33%, which was pretty expected, to be fair.

“But then there was the sneaky little entrenchment attempt by Nanaia. I was thinking ‘oooh’ this is going to be a DISASTER hahahaha.

“Then the PM’s talking about it like it’s a “mistake that they’re going to own as a team”, meanwhile Nanaia’s like ‘nope, I did nothing wrong, the rest of the cabinet should have read the papers’, hahahah, talk about chucking the boss under the bus!

“And then the Herald and even STUFF, if you’ll believe it, are actually hammering the prime minister, trying to work out if she’s lying or just incompetent,” laughed Sharma, struggling to hold back tears of joy.

“Meanwhile, Roy Morgan comes out with a poll with Labour at 25%, which is actually just getting a bit sad really, but still really funny,” said the ‘Momentum Party’ candidate running for Hamilton West.

“Oh and then we got to see ‘Angry Ardern’ hahaha, getting calmly taken to pieces by Luxon and Seymour, and she’s just absolutely losing the plot, like ‘deny, deny, deny’, hahaha.

“And now all the media are saying that Labour needs to sack Mahuta if they’re going to have any chance of anything at the election, but the Prime Minister won’t sack her because she’s too much of a coward,” said the former Labour MP who’s not bitter at all about getting kicked out of his party.

“So yeah, hahaha all of that became a bit too much for me and the neighbours made a noise complaint”.