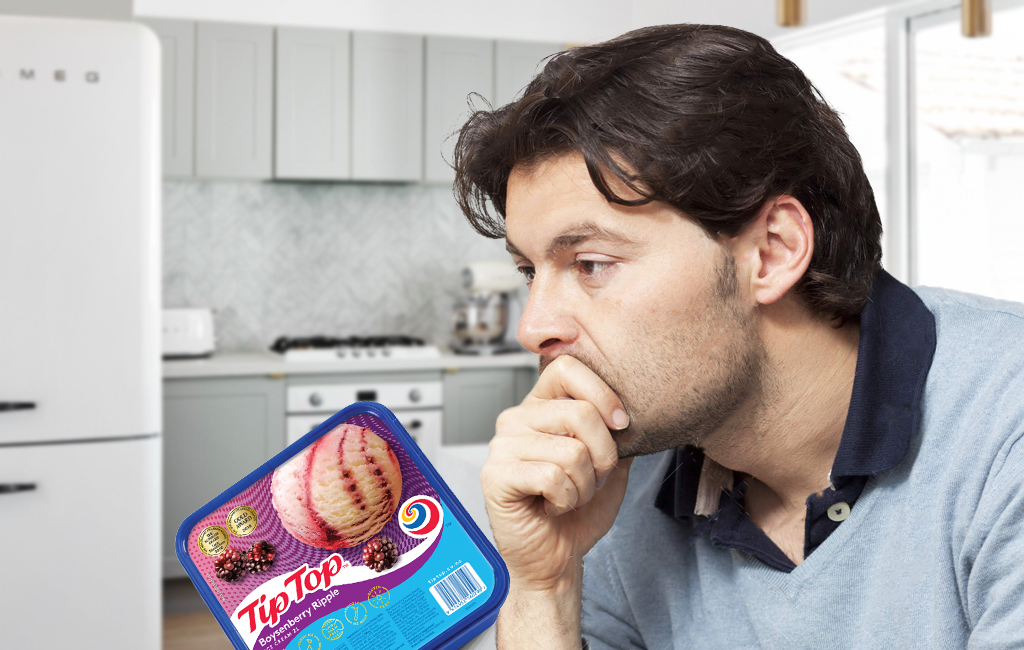 Nelson man Shane Sharland got his hopes up to record levels yesterday evening when he saw what appeared to be a tub of Tip Top Boysenberry Ripple ice cream in the bottom of his freezer.

The 30 year old who had obviously been stung by misleading containers before, nevertheless plunged his hand down into the frozen drawer excitedly, pulling out the ice cream container, with what his wife Sarah described as “the goofiest smile on his face”.

“Yeah we’d had dinner and we were watching a bit of Netflix, and at that moment I just really felt like some ice cream ay,” explained the foolish electrician.

“I was so gutted when it was just soup. All I wanted was something a little bit sweet after dinner,” he told our reporter this morning, clearly still upset by what he perceived as a complete betrayal.

“That was kumara and pumpkin soup that I made a couple of weeks ago,” said wife Sarah, who was annoyingly amused at Shane’s misunderstanding. “We’ll be having that for dinner tonight”.

Mr Sharland shed further light on exactly how the incident impacted his well being and overall emotional state. “I think the thing that hurt the most, and what brought the most shame upon me as a man, was that this exact thing had happened to me last week. And so I’ve completely failed to learn from my past mistakes.

“Last time I opened up a tub of salted caramel ice cream, only to find a solid block of beef and onion casserole,” he said weakly with a defeated look in his eye.

In order to satisfy his uncontrollable craving for sugar, Sharland explained that he poured himself a glass of milk and mixed in an excessive volume of milo. “Yeah four or five heaped tablespoons of milo with milk did the trick. Mixed it up and it barely dissolved at all, obviously. I just had a spoon there for the delicious layer of brown slime on the top. Beauuuutiful.”

The Whakataki Times can confirm that “ice cream” was added to the whiteboard on the fridge in the hope that it would eventually be purchased at the supermarket.