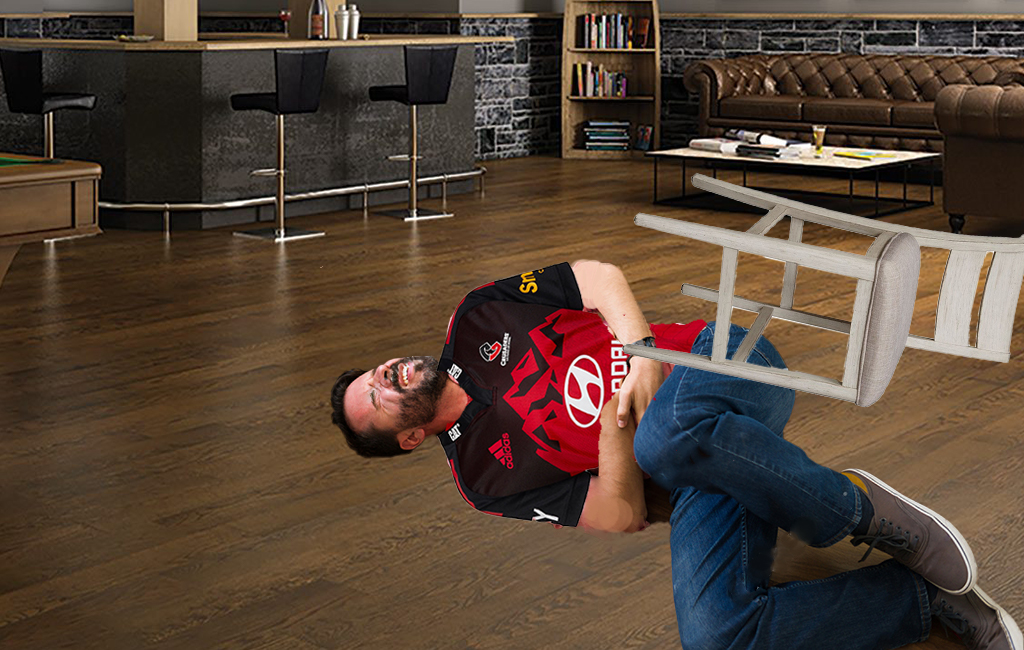 Kev O’Leary’s tailbone was worse for wear this afternoon.

That’s because the 38 year-old from Rangiora was recovering from a frightening fall off a barstool at Mainstreet’s Sports Bar, due to being completely surprised and blindsided by the news that the Crusaders have made the Super Rugby final.

The Whakataki Times reporters caught up with the north Cantabrian who appeared to be in a constant state of disbelief during his interview.

“They made what? So you’re telling me the 12-time champions are in yet another Super Rugby final?” quizzed O’Leary who appeared to still be in shock after hearing the news that the most consistent franchise in Super Rugby history were somehow off to the big dance again.

Our reporters on scene explained that this implausible outcome happened because of their 20-7 victory over the Chiefs in Christchurch last night.

“For the life of me I just can’t process how they’re into their sixth straight final? They’ve won 27 straight home playoff games and won the title every year since Razor has been coach since 2017. The prospect of them in the final again is really far-fetched,” said O’Leary, who was clearly still struggling to come to terms with this unpredictable situation.

Mainstreet’s Sports Bar barman Chase Ingham said he’d witnessed other simultaneous falls from patrons who fell off their bar stools due to being completely caught off guard by news of the Crusaders making another final.

“The Crusaders in the final huh? Gee I guess nobody really expected that. No wonder we had so many of our regulars hitting the floor at the same time,” Ingham said as he helped another local back onto their stool.

Ingham reassured our reporters that all patrons at Mainstreet’s Sports Bar will be closely watched next week should they hear the unlikely news that the Crusaders lift the Super Rugby trophy for the 13th time.