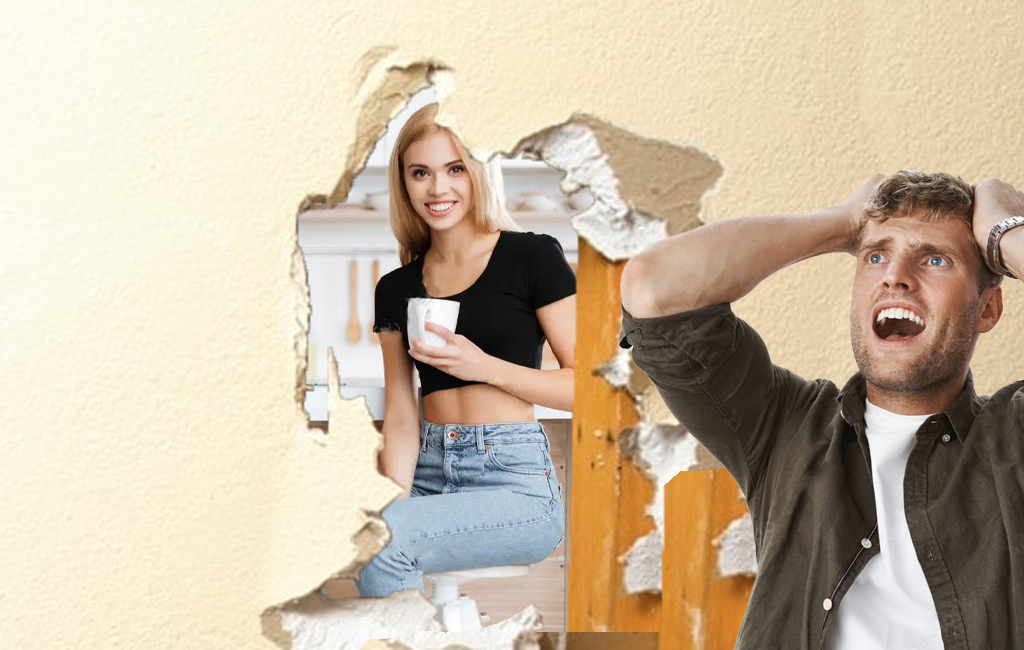 Recent new homeowner Chelsea Golding, of Hamilton, has given her husband Isaac the fright of his life today.

Isaac had taken this Labour Day as an opportunity to do a few life-admin things in town this morning. When he got home however, he found that his wife had charged herself up watching repeats of The Block, and in a rush of blood to the head, smashed a hole in the wall separating the kitchen and lounge.

“What the hell have you done??” asked Mr Golding in a panic as he stood in the lounge looking at his wife sitting in the kitchen, something that was not possible until the hole in the wall had been created.

“What?” she questioned totally innocently. “We’ve been talking about opening up that space and having an open plan living area for ages,” she said, confused that her husband was upset that she’d just smashed a hole in the wall.

“You even said I should do it!” she exclaimed to Isaac, who had a look on his face that showed no recollection of this conversation ever happening.

“We were watching The Block last night and I said ‘we should do the same thing they’re doing with our kitchen and lounge’ and you said ‘yeah good idea’”, protested Ms Golding, conveniently leaving out the point that her husband was also engrossed in his phone at the time, likely scrolling through T.A.B odds.

“It’s fine, I’m pretty sure that wall isn’t load-bearing,” Golding said to her husband, who still had a look of total disbelief on his face.

“That hammer’s actually really heavy though and it took me ages just to make that hole, so I need you to do the rest of the wall for me.

“I can’t believe you don’t remember talking to me about doing these renovations!”

Husband Isaac, who had now been well and truly gas-lit by the woman he loves, picked up the sledgehammer and began vacantly smashing away at the rest of the lounge wall.