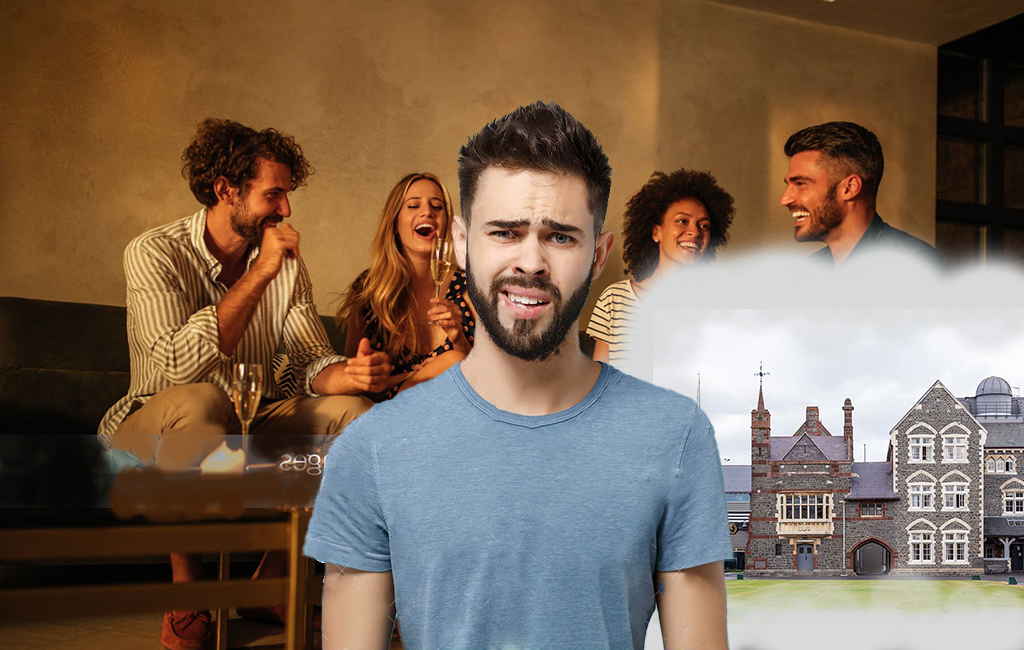 Campbell Stanway, 24, thought his days of discussing anything high school related were over and in the past.

But after recently moving from Wellington to Christchurch, he received an education at a housewarming party on the importance of understanding that in Christchurch, it definitely matters what school you attended – and it is also important to take note and judge others on which one they went to as well.

Our reporters were on scene at the housewarming party in St Albans.

As newcomer Stanway nervously began edging his way into a circle of people he hadn’t met before, he was slightly caught off guard by the question from the group’s host Hamish Owens.

“Hey mate, I’m Hamish. Hey so what school did you go to? I went to Christ’s College,” Owens said to Stanway intensely, as others at the drinks gathered around like vultures waiting for his answer.

“Ah right, hadn’t heard of that one. I just went to one in central Wellington.”

“Oh, what one was it? There’s a few central city ones. How have you not heard of Christ’s? You know, the independent private boys school?” Owens said in a state of shock as someone had just said they had not heard of his prestigious school.

“Yeah ok, maybe I have heard of Christ’s, is that the one that’s always been good at rugby. Dan Carter went there didn’t he?

“No, that’s Christchurch Boys High. Do you know where St Margaret’s College is? I went there,” said Sophie Curtis, who just injected herself into the conversation as she was about to burst at the seams, knowing she could not handle another second without revealing what school she went to.

“So just to be clear, was it Wellington College, the all boys school, or Wellington High School, the public mixed one. There is a big difference between the two,” Owens again questioned fiercely.