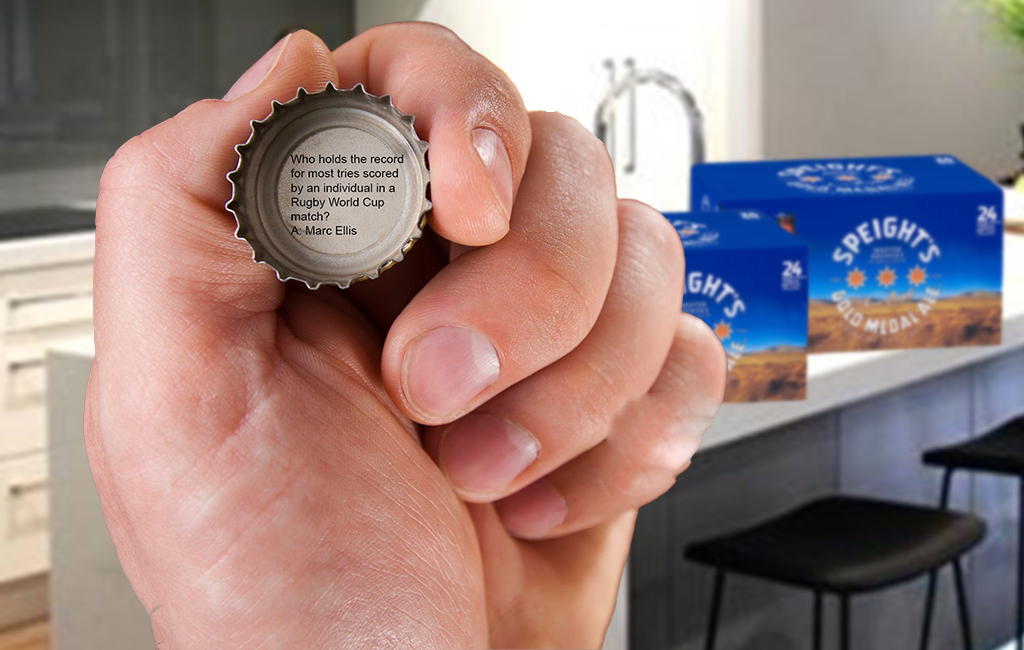 MARC ELLIS, 6 TRIES AGAINST JAPAN IN ‘95

Tim Cunningham, 27 year old electrician and Whakataki’s new kid on the block, made waves last weekend at a friend of a friend’s social gathering.

He came into the Saturday night shindig fairly cold, tagging along as “Dave’s friend from work”, which was always going to be a tough assignment socially.

Cunningham said hello and smiled politely as he was kindly introduced to the people there. As he moved past the kitchen he made a mental note of the 24 box of Speight’s sitting next to the fridge. Predictably several of the male attendees had Speights bottles in hand.

“Saw the guys were drinking Speight’s, so at that point the thought crossed my mind that they might be doing the bottle cap questions,” Cunningham explained casually.

“Just then Dave’s old school friend Paul went and got a new beer from the fridge, twisted the cap off and started reading out the question. The question was: ‘Who holds the record for most tries scored in a single Rugby World Cup match?’”, he smiled with a twinkle in his eye.

“I was thinking suuuurely someone’ll get that straight away, so I just kinda waited and looked around to see who’s gonna get it. Didn’t want to come in toooo hot as the new guy right?

“But all I could see was blank faces. I heard a few wild guesses like Christian Cullen and Jonah Lomu… Doug Howlett too I think?

“So then I thought, right, I’m going in. Took a big deep breath and said ‘Mark Ellis. Six tries against Japan. 1995 World Cup’, and Paul was just like ‘How the f*** did you know that?” he said, breaking into a full grin.

“Then the other boys were like ‘OHHHH!’ and it was high fives all round. Good old Speight’s trivia ay, what an icebreaker! I could do no wrong from then on,” explained Cunningham while leaning back in his chair and putting his feet up on the coffee table.

The Whakataki Times understands that Mr Cunningham has big plans for an O.E to the UK next year, with the specific intention of being a contestant on The Chase.