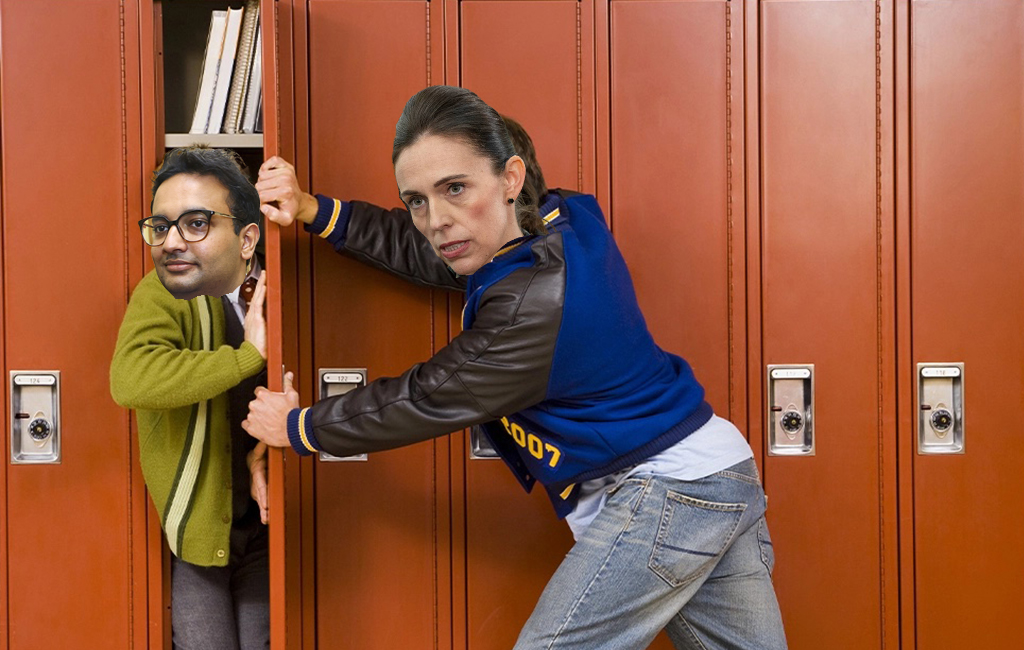 After Labour MP Gaurav Sharma claimed that the Office of the Prime Minister has been engaged in a “culture of bullying” at Parliament, Prime Minister Jacinda Ardern has taken the drastic step of stealing his lunch money and stuffing him in his locker.

In a proactive step to reassert dominance and put the Hamilton West MP back in his place, Ardern has taken a leaf out of the American movie school bully’s playbook.

“Look, he’s got to learn to be kind, and telling everyone that there’s a culture of bullying at parliament is not very kind,” said the PM.

“How are we supposed to deliver for kiwis if people keep causing trouble and keep not doing what I want them to do? It’s so not kind!”

Mr Sharma was shaken but undeterred by the incident. “Gee that takes me back. Haven’t seen the inside of a locker since back in high school! Boy, I’m hungry now though…”, said the MP who obviously had no money for lunch that day.

Embattled National MP Sam Uffindell rescued Sharma from his locker when he heard banging as he walked past the parliament lockers shortly after the incident. “That’s old school bullying from Jacinda, I haven’t done anything like that in years!” he said with a smile.

“I like to think I’ve moved on from that sort of carry on, maybe be a bit more subtle, but good to see the PM’s still putting in the hits!

“Gaurav’s lucky he didn’t get a wedgy and his face shoved down a toilet!” laughed the unsuccessful “flatmate of the year” entry.

The Whakataki Times approached Ardern for comment, but she declined as she was apparently on a warpath looking for other MPs that weren’t being kind enough, so she could deal out some more physical punishment.

The main bully of parliament though, Speaker Trevor Mallard, was also unavailable for comment as he was allegedly stomping through the halls looking for Ardern so he could shove her head down a toilet.