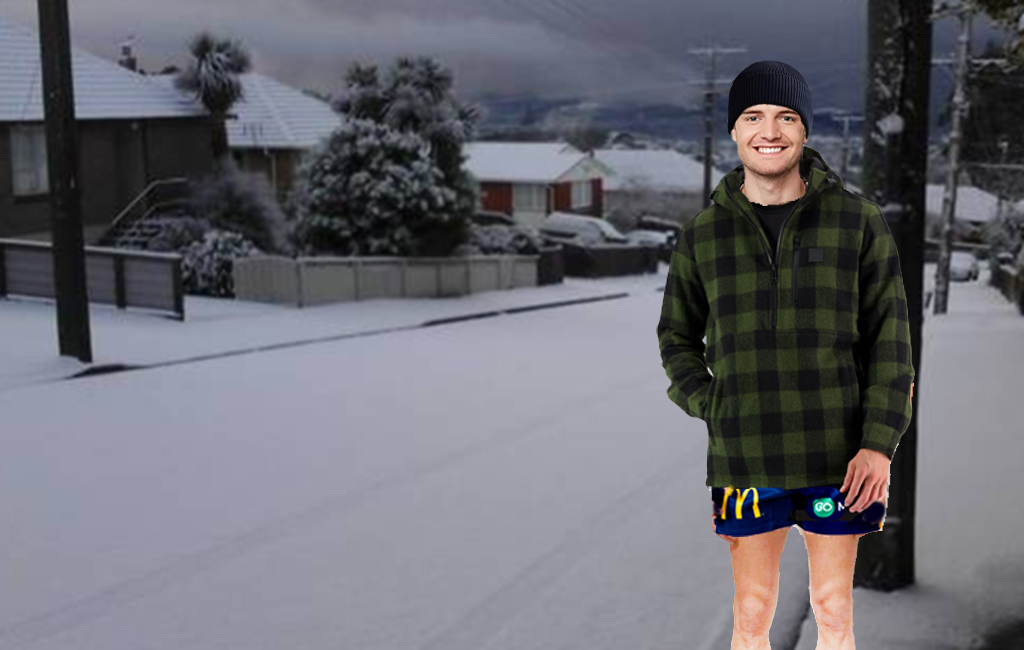 The 24 year-old Otago University student was still in his usual day-to-day attire of stubbies and jandals, despite Dunedin experiencing the most snowfall nationwide.

Our reporters caught up with Donovan on his way to an early morning lecture.

“Just thought a jacket and beanie should do the trick,” he said.

“I’ll be honest, it just felt like another morning in my Castle Street flat. I woke up just in time for my first class and could once again see my own breath inside my room, everything seemed kinda normal,” said Donovan who was sporting his Otago rugby stubbies and jandals and not really taking much notice of the winter wonderland that had hit Dunedin.

“I actually didn’t really feel the sudden change in temperature, I just thought maybe the cardboard Speights box covering in a broken window had fallen off in the night or something.”

Some of Donovan’s university friends weren’t surprised to see him in his usual stubbies and jandals as he made his way through the University grounds.

“Honestly, you get so accustomed to someone, that it’d actually just be weird to see him in some sort of track pants and proper footwear for once.” said Keaton Watson.

“Yeah, like I’d actually be concerned if he’d thrown on a couple of extra layers to keep the bottom half of his body warm. Some people just don’t suit sudden change.” said Carey Osbourne.

Dunedin wasn’t the only one hit with the unexpected winter blast. Snow also fell in Christchurch for the first time in over 50 years during October and several roads were closed across the South Island. However despite the cold snap hitting Dunedin the hardest, it didn’t really seem to bother the aspiring P.E teacher.

“I used to play junior rugby in bare feet as a youngster growing up back in Balclutha, so I’m kinda used to the cold. It’s technically spring, what’s the big deal anyway guys?”

“Oh well, I’m looking forward to warming up at home after Uni. Couple of swappa crate bottle in the fridge will do it.”