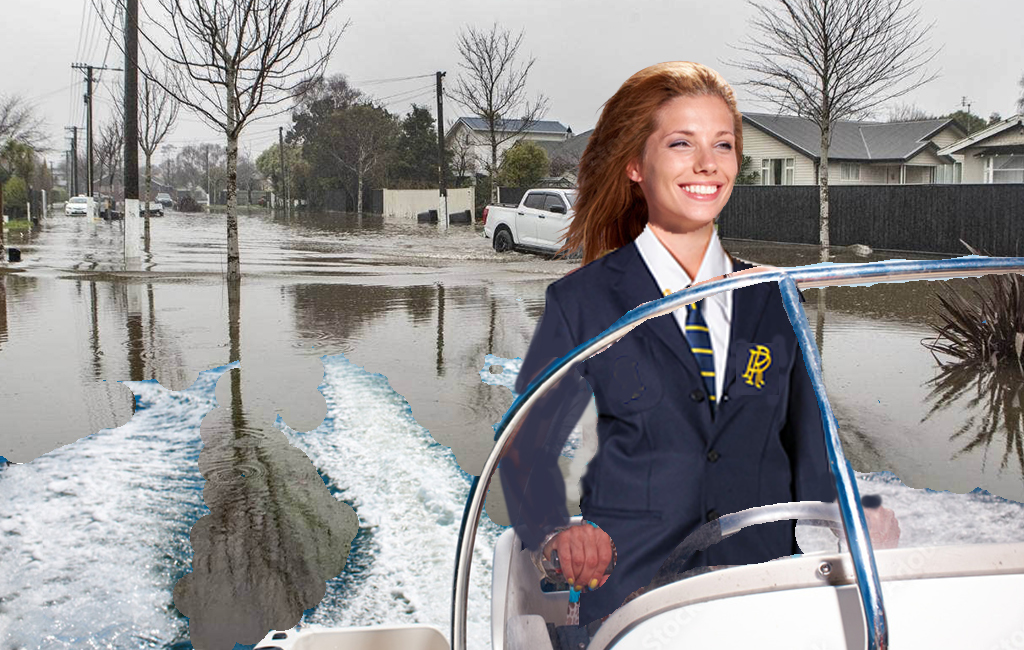 GREAT TO GET OUT ON THE WATER

Widespread surface flooding across Christchurch was absolutely no match for one determined Rangi Ruru Girls School student in Merivale today.

With a bit of water preventing the usual school morning drop offs in daddy’s Jaguar, 15 year old Ruby Whiting, and several others from the private school, sought the normal alternative to a vehicle and hopped into their families’ boats instead.

The Whakataki Times spoke to Ruby outside her home in Merivale.

“I mean, we usually just use the boat for our family holiday at our bach in Kaiteriteri once a year, but with today’s flooding, we just thought ‘why not?’” Whiting said, like it was completely normal to sail down the street to school in a luxury pleasure vessel.

As our reporters were splashed by the water from those racing their way to their private school for a day of learning, they came across Whiting’s father, who was being bossed around by his daughter, as is the norm in his life.

“Daaaad!! Hurry up I want a chai latte on the way, we’re gonna be late!” Whiting whined to her Dad in the affluent suburb.

“Yes, coming princess! Have you seen your younger sister this morning?” said Mr Whiting, a lawyer, who happily pays $25,400 per year in tuition so his daughter isn’t exposed to New Zealand’s “ghastly” public school system.

As our reporters approached Mr Whiting for further comment, Ruby’s younger sister Sophie,11, zoomed past, speeding her way to her primary school on a jet ski.