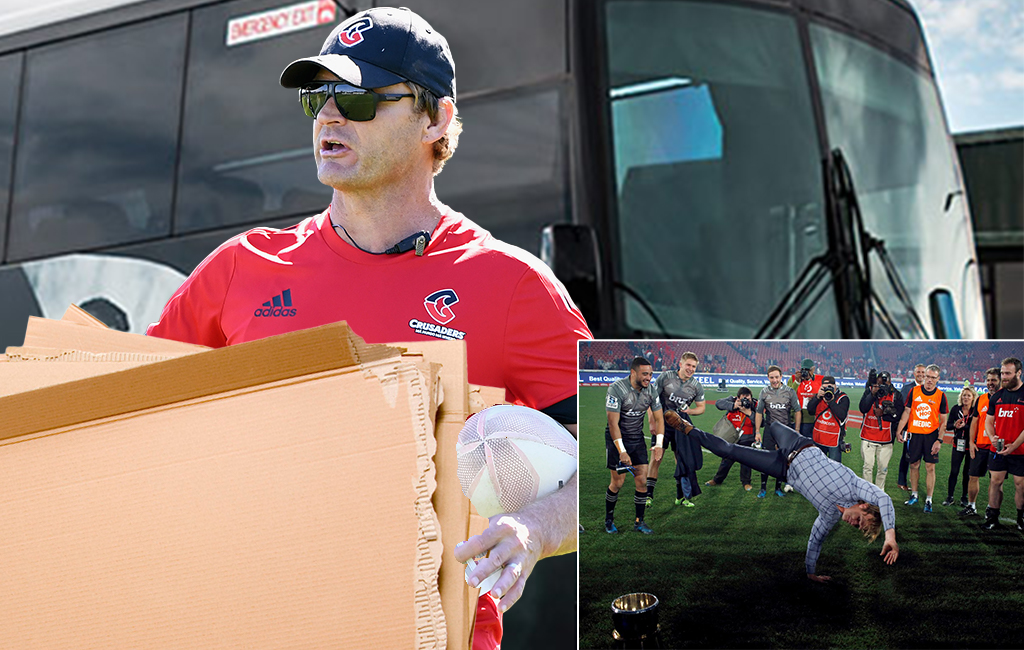 With the Super Rugby Final against the Blues, fans are not only expecting his team to perform, they’re also anticipating Razor’s trademark breakdance routine should the Crusaders win.

To eliminate any doubt, the legendary celebrator of Super Rugby titles has stacked the team bus with cardboard boxes, which will provide a slidy surface for Eden Park.

“I’ve been so used to the home comforts of our stadium in Christchurch, hard to know if Eden Park will give me the same effect as it does in Crusader-country,” Robertson said with concern on his face as he loaded the folded cardboard boxes into the team bus.

“It may be that the Auckland climate makes the surface too grippy, which would be disastrous for executing the right moves to give the fans what they deserve. Would also be nice to not get my nice white shirt covered in grass stains for once too”.

Christchurch based b-boy and pop locker Styles-D has revealed that he has been giving Razor private lessons every Sunday night at the Pioneer Rec Centre in Somerfield. “The fans are in for a treat tonight, the old fulla’s moves are fresh,” said the 21 year old forklift driver.

“He’s got the cardboard, which I recommended, so that’s good. The boys on the field need to do the business first obviously as he’ll look a bit stupid breakdancing about a loss.

“I reckon the grassy surface has been holding him back for years actually. With the cardboard though…look, all I’ll say is don’t rule out a head-spin,” said the dance teacher as he tapped on his nose ominously.

Robertson showed a glimmer of confidence as he packed in the last of his cardboard boxes into the team bus. “Having a final away from home isn’t easy, let alone knowing how the turf will pull up post match. Better be safe and have the cardboard dance mat for the last dance.”

The Whakataki Times reached out to Blues coach Leon McDonald about whether he had anything special planned for a Blues victory, and he silently pointed to a fully-stocked beer fridge.