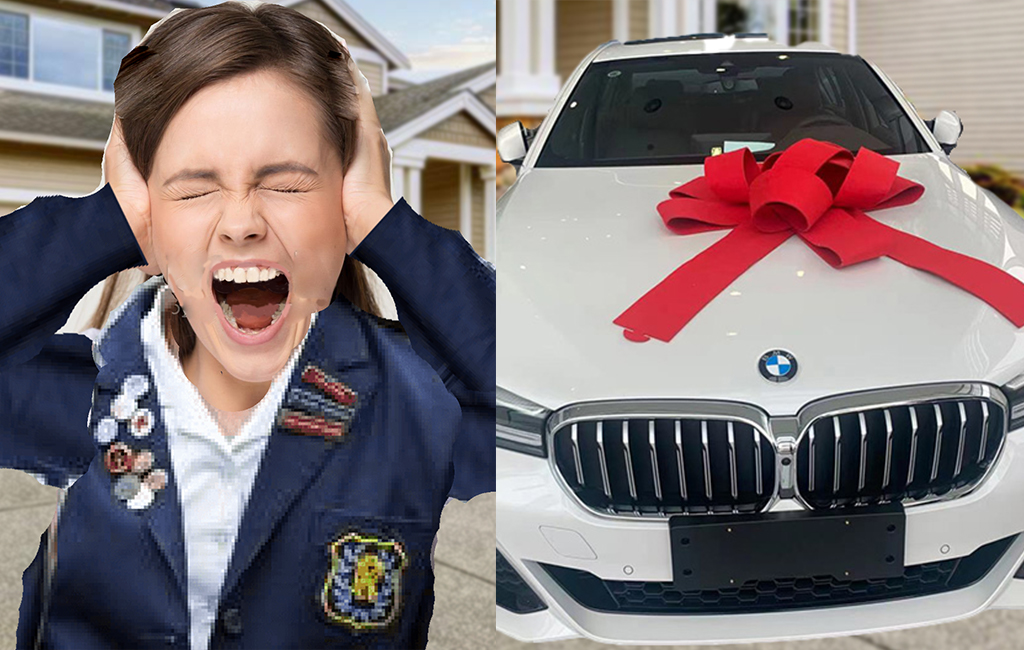 Tayla Davies,16, was sobbing uncontrollaby at her parents’ Merivale house in Christchurch this morning, after receiving a brand new BMW 5 Series instead of keys to her first home as a 16th birthday present.

“Daaaaadddd!! What the hell is this?!” screamed the distraught birthday girl from her parents’ driveway.

Davies, who attends Rangi Ruru Girls High School, which costs a mere $25,400 per year for tuition, was completely dumbfounded as to why her parents would gift her a high-end luxury car instead of her first home in an affluent Christchurch suburb.

“But Dad, Livvy’s parents just got her a house in Papanui! I can’t be seen with only getting this for my 16th! What the actual fuck?!” wailed the teenager, ignoring the fact that she’d just been handed a vehicle valued at $70,000.

Tayla’s father Roger explained his side of the birthday disaster to the Whakataki Times.

“Well, we thought maybe keys to her first home would maybe be something we’d give her for her 18th birthday. I guess we can’t keep up with these teenage trends and what they want. My mistake!” he chuckled meekly as he opened up the latest Real Estate magazine for new house listings for Merivale and Sumner, at his daughter’s request.

Tayla, who has no concept of the value of money and will never know what paying off a student loan is, gave one final comment to the Whakataki Times reporters as she stormed up to her bedroom in tears.

“Livvy’s dad drops her off to school in a Maserati anyway, so it’s not even like I can make do with driving my own BMW. Can’t be seen with that piece of crap! Worst birthday present ever. R.I.P me.”