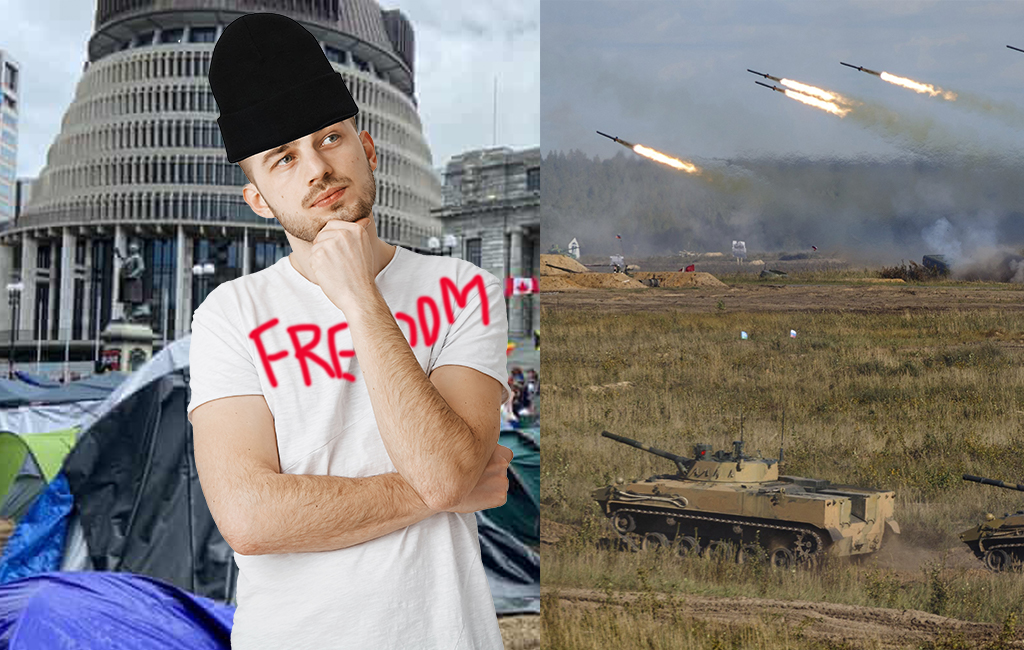 With World War 3 just around the corner, local anti-vaxxer and parliament festival-goer Jayden Wild has had a few of his personal beliefs put into perspective.

“Yeah bit of an eye-opener ay, this Ukraine carry-on. People are talking as if it could be another world war. I’m pretty sure that in World War II, governments used to force people to go and fight!”, said the man who frequently compares anyone who doesn’t agree with him to Adolf Hitler.

“It’s kinda like, I reckon going to war and dying would be way worse than going on the dole because I didn’t want to have the vaccine. It might even be worse than having Bill Gates nanobots injected into you!”, pondered the former essential worker.

“And actually, if you think about it, this whole plandemic should come to an end sometime, and then I could just go back to work. It’s temporary! The mandates are way more temporary than…you know…death.”

As Whakataki Times reporters sought more comment from the man in the middle of the parliament protest camp site, he stopped short as his foot slid on a pile of human droppings. “God this place is disgusting. Is this what freedom is? Walking around stepping in other people’s shit on the ground. Fuck sake!”.

“I’m beginning to think that this is too much freedom and it’s turned into hell! Maybe too much of a good thing turns you into a fuckin loser”, the man said desperately as his mind raced visibly in his eyes.

“Actually nah fuck this, I’m out. I need to sort my life out. Where’s the closest vaccine centre? COME TO ME JABCINDA! Administer the micro-Bill Gateses to my bloodstream!”